I am not a teenager. I play one on the Internet.

I'd still love a "Server Fault Leader board" that should show motion amongst the rankings (like the old distributed.net scores!), but I'm not going to go scraping their site just to do that myself.

I'm really enjoying the site. Eventually, I'll get around to asking a question or two. For now, though, I'll continue answering questions and having a good time.

This is a horrible thing for me to get started doing. *sigh* Still, with 3 days membership I'm up to 892 reputation. I don't see anybody else who is as high with as few days membership. I'd love to know how my rate of ascent compares to other users.

I'll be cracking page 2 of the user list tomorrow.

I learned that I'm not the only one having problems with the White House "RSS" (really Atom) feeds. My feed reader (a very, very hacked up version of TT-RSS) populated the database with a single entry from the White House blog feed, but never loaded any more articles, though examining the feed "by hand" shows that there are new entries.

After doing some digging around, I found that the same things that Rogers Cadenhead found (before I found his blog entry, of course). The "id" attribute of each entry, used in the TT-RSS schema as the primary key for the row in the "entries" table. Lovely.

I know there are a lot more pressing problems for the U.S. Federal Executive than fixing their "RSS" feeds, but surely it's somebody's job to work on this. Please fix your feeds.

A friend of mine just sent me a link to an InfoWorld piece about Terry Childs and the situation surrounding his arrest in San Francisco. The email referenced in the article sounds very credible to me. It sounds to me like a classic game of politics, taken to an extreme. Terry probably got into an argument with a vindictive supervisor, probably used words that were too heated, and ended up in a bad place.

If the details about Terry's controlling streak are true (not wanting to save configurations on remote routers into flash, disabling password recovery), I have to take some "respect points" away from Terry for making what I'd consider questionable design decisions, but the picture the email in the article paints is of a competent and efficient network engineer.

The "Long Tail" of poop.

For reasons that I cannot identify, I decided to chart the number of results returned by Gooogle for various spellings of the word "poop". 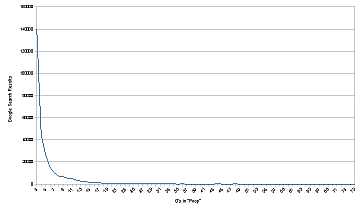 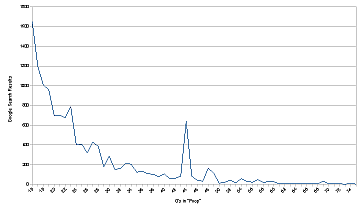 I have absolutely no explanation for doing this.

If you'd like, I've also made the raw data available for remixing.

I just saw a post on MAKE magazine's Hackszine blog about ShiftSpace. My initial reaction was "Oh, it's a new Third Voice..." followed quickly by the musing, "I wonder when they'll be hounded into nonexistence."

I'm still pissed about how Third Voice was received. In today's even more volatile copyright climate, I can't imagine that ShiftSpace will fare any better.

Fixing Error 0x80070052 When Copying Photos to a Memory Card

I'm getting at least tens of hits per day coming from searches for keywords like error, 0x80070052, and memory card. It turns out that after writing my snarky little post relating to Mark Russinovich's blog post about problems copying files to USB flash drives, I posted with the words "memory card" in the body of the post, and now I'm a keyword magnet. Some people might be game to spin up a Google AdSense subscription, but I'll just say:

I make one-off email addresses for nearly every online vendor I deal with. Usually, the addresses are in the form of domainname@peeved.org, as is a common practice with people who own domains.

My one-off address for tickets.com started receiving spam on 5/11, from the Unitarian Universalist Society of Cleveland by way of a spamming service at Constant Contact.

Sure, sure, I could "unsubscribe". Since I'm not going to do any more business with Tickets.com, I'm just going to blackhole the email address anyway, but it does make me wonder how these Constant Contact or UUSC people got the address to start with.

Here are the two messages I received: Message 1 and Message 2.

Gooooooogle's title image today seems a little "off". I read it as "Googe". I've always subscribed to the graphic design philosophy that something which looks accidental, even if it's not, will be seen as accidental.

"Googe" makes me feel vaguely offended and dirty. The bits of "chocolate" on the second "o" don't help that feeling. "Aww, man-- your dog just googed all over the futon!"

I read Bunnie Huang's blog because I long to be a hardware geek, but never actually do anything about it. Having said that, I couldn't help but comment about his Name that Ware posting for January, 2007, if only because he seems to feel much the same way I do about the recent trend of idiotic mass hysteria by the American public.

I believe that fundamentally, the most effective way to deal with terror is to not be afraid of it. I say take it with a stiff upper lip, ignore it, and live life like you used to, as a free society with great liberties and tolerance for all walks of life. Travel. Express. Build. Innovate. Research. Be an Individual. Be smart about who you trust, but still be willing to trust.

I agree with everything Bunnie says here, but I think that it's unlikely to happen, because living in fear is seductive, and because it drives a feedback loop that only amplifies itself. Don't misunderstand-- I'm not a conspiracy theorist who believes that this whole "War on Terror" is a big plot. I believe that what we're seeing is the manifest result of a confluence of the "best" interests of different social groups being advanced.

Terrorists want to inflict terror. That's what terrorists do. It's in the best interests of terrorists to have the American citizenry in mortal fear. The more terrified that the citizenry is, the easier it is for terrorists to inflict more terror. At this point, terrorists can inflict mass panic by doing nothing, while marketing companies put out lighted signs. This is, no doubt, cause for much celebration in terrorist circles, if only for the cost savings in materials and labor.

Most Americans (citizens and politicians) have lost touch with the fact that the government is sanctioned "by the people, for the people", and look at "The Government" as being a featureless black-box over which they can exert no influence. The American political machine has discovered how to exploit the two party system to create elections that pit candidates with no major differences against each other, and to spin everything such that the candidates have a superficial appearance of difference. The American political institution, as it exists now, wants only to perpetuate itself. Constituents are only too happy to oblige, so long as their districts continue to receive the gravy-train of tax dollars. The "War on Terror" has been a wonderful gravy train for pork barrel spending. To this end, the best interests of the political establishment lie in pumping as many tax dollars through the government as possible to keep average citizens happy, and to reinforce the public perception that the operation of government isn't something citizens have any material control over. The "War on Terror" is a great tool for politicians.

The average American citizen has little in the way of motivation or long term goals. I get the feeling that most of my fellow citizens are working hard and striving to make it to the next evening "reality" television show broadcast, the next major sporting event, or the next weekend. (Perhaps a few have a longer-term goal to buy another new SUV, obtain another home equity loan and sink deeper into debt, or get locked into another multi-year wireless telephone contract w/ a shiny new phone and some nice MP3 ring tones.)

We are an aimless, sedentary society. Human nature is to be lazy, fat, and "happy"-- to expend the least possible energy for the greatest reward. Life, in general, works this way-- sinking into a local minimum in a vast fitness landscape. It's also human nature to want some else to take care of life's details for you. I do think that people can rise above human nature, but they have to have their attention drawn to their human failings. Living in mortal fear, and asking "The Government" to take care of you is great, because it makes a convenient excuse for such a slovenly, fiscally irresponsible lifestyle. For those who profit from this mortal fear, pointing out the awful humanity of fat slob Americans is the last thing they'd want to do.

As far as I can see, it's a win / win scenario for all the parties involved! The terrorists get to inflict terror, the political machine gets to perpetuate itself and remain in power, and the average American citizen gets to fulfill their basic human desires to be complacent and "taken care of"-- sinking deeper and deeper into a warm, soft cocoon of materialism and debt while trying to seek comfort from the mortal fear they live in. Is it sustainable over the long term? Does it really matter?

I'm not scared of the terrorists, I'd like my freedom of speech and assembly back, and I'm damned tired of playing "security theatre". Being a late 20's / early 30's self-employed, unmarried, childless, fiscally conservative citizen who pays for his own health insurance, doesn't drive an SUV, owns a house, and doesn't have any credit card debt makes me feel like a hugely underrepresented demographic, both in government, and in American society in general. Worse, I know that I'll be paying for fellow citizens' lifestyle choices in the next few years-- right before China comes in and buys this whole thing out from under us.

Hopefully somebody comes out of this whole thing ahead. I don't know how to fix it, and I don't even think I care anymore. For my part, I feel fairly certain that the reward for my labor won't be what I'd like (an independent lifestyle, free from the interference of others, to live and work as I see fit), but rather will be a life of working to subsidize everyone else when we eventually have to "pull together" and try to bail the country out.